Goodreads Summary: The breathtaking story of five brothers who bring each other up in a world run by their own rules. As the Dunbar boys love and fight and learn to reckon with the adult world, they discover the moving secret behind their father’s disappearance.

At the center of the Dunbar family is Clay, a boy who will build a bridge—for his family, for his past, for greatness, for his sins, for a miracle.

The question is, how far is Clay willing to go? And how much can he overcome?

Reading a new book by your favorite author is honestly one of the most nerve wracking experiences a reader can go through There’s obviously the intense excitement and anticipation that lead up to the release date but then there’s the apprehension that always manages to creep its way into your happy thoughts. What if I don’t like it? What if their other books aren’t even that good and I only thought they were good because I was young and hadn’t read many other books? All these feelings and many more accompanied me as I nervously anticipated the release of Bridge of Clay. I have a lot of favorite authors but Markus Zusak is definitely my number one. I first read The Book Thief when I was in grade seven, and that was really the book that made me realize the power that words have. Before that books were always about the story but The Book Thief made me realize how beautiful words could make even the mundane magical. I then read his other books and fell in love with every single one of them. And once I was done, I found out that he was working on a new book: Bridge of Clay. It said that the book was supposed to come out in 2011: this was in 2012 so I thought to myself ” Cool! The release date was postponed but it’s definitely going to come out soon. ” Flash forward six years, and I can finally say that I’ve read Bridge of Clay. I’ve never waited that long for a book and after thinking about it for a while, I really think that it was worth it.

The first thing that I think is important is that you can’t compare it to The Book Thief. That’s one of the things I love about Zusak: his books stand on their own and they’re all unique and different from one another. You can’t go into any of his books with preconceived notions which is a really hard thing to do as a reader. Obviously if you love an author for certain things that they do, you’re going to expect them to do those things. With Jodi Picoult I expect great multiple perspective novels that discuss complex moral issues.With Becky Albertalli I expect cute fluffy contemporaries. With Kate Morton I expect dramatic plot lines involving rich people. But with Markus Zusak, I have learnt to expect the unexpected. It definitely wasn’t as good as The Book Thief but that’s pretty hard to do so that doesn’t bother me. But nonetheless Bridge of Clay combined all the things I love about Zusak into a breathtaking 500 page novel. There were times where I asked myself: “why on earth did it take him 13 years to publish this after The Book Thief” but I guess I understand. The Book Thief was such a huge success and it’s really difficult to live up to that. I mean sure he could have profited off that success, and published a book every year knowing that people would buy or no matter how shitty it was but he didn’t. That’s one of the things I admire about him: he takes writing very seriously and I think it’s remarkable how he wanted to give his readers only the very best. He’s my role model and if I could even be a quarter of the author he is, I would be extremely happy with myself.

So getting into the actual novel. Bridge of Clay is one of those books that you read the summary and you can’t quite grasp how it’s going to play out. I love books like that. I never thought that I’d fall in love with a book about a boy building a bridge but Markus Zusak just knows how to make even the most random of plots somehow work. I absolutely adored the way it was told. The book jumps around in time in a way that could’ve been super confusing but instead kept me on the edge of my seat. Everything is slowly revealed and though that’s something that doesn’t always worked, it was done really well. None of the stories were boring and they blended together in such a beautiful way. I was constantly expecting the worst and Zusak definitely delivered on that front. He sure knows how to rip your heart apart.

My favorite thing as with all of his books were the characters. They were all so precious and beautiful and I love the way they’re portrayed. Zusak is really great at creating multi-faceted characters with complex emotions. I didn’t exactly like all of the characters, but I loved each and every one of them as though they were my own. Clay is obviously at the centre of the book and while he is absolutely precious and beautiful, I can’t pick a favourite character because each and every one of them is beautiful in their own way. I’m very mad at Markus Zusak for the things he puts his characters through. I am not someone who cries because of books but he had me in tears multiple times. A book that makes me cry is usually a fantastic book.

A good Zusak book isn’t truly complete without a gorgeous writing style. His images are so precise and odd but it somehow works? I’ll read a sentence like “the pictures just out of the toaster” and if anybody else had written that I would’ve been like what the fuck but instead I instantly know what he’s talking about. His images aren’t confusing and though they’re simple they’re absolutely beautiful. He has such a wonderful grasp on language and the way he explains really simple things is truly something else. I love reading his books because it gives me a chance to see the world through his eyes for a couple of hours and there’s really nothing else like it.

What About You? Have You Read Bridge of Clay? Are You Going To? Let Me Know in The Comments Down Below. 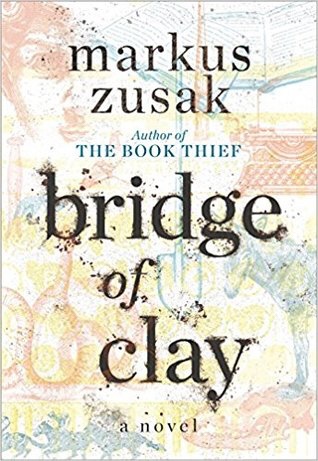 So six years in grade seven I checked out a book out of the library because it had the word book in the title and being the book nerd that I was, I had to read anything remotely related to reading. Little did I know that this book would quickly become by favorite book of all time, that the author would become my favorite author and that his words would change my life forever. If you haven’t already gathered from the picture or my username that book is “The Book Thief.”

Since then I have read many books that were amazing, that qualified as favorite but I never read a book that surpassed the beauty that is The Book Thief and I don’t think I ever will. Each word in it is chosen masterfully and the characters are amazingly constructed so you feel for each and every one of them even if they are minor characters. Zusak has a way with words and the way he weaves them is truly something special to witness. I urge you to read it if you haven’t already because it is a beauty and an experience that every person on this earth deserves to read.

His other four books, I Am The Messenger And The Underdog Trilogy are just as brilliant and they improve in chronological order though they’re all five stars read. Markus Zusak knows how to tug at your heart strings and reminds you of all the beauty that’s in the world. In case you can’t tell, Markus Zusak is my role model and I admire him so much. If I ever become even a quarter of the person he is, I will consider myself very lucky.

So after six years of patiently waiting for Bridge of Clay’s release date year after year hoping that it’ll happen and being utterly disappointed, it’s finally here! Bridge of Clay is coming out in October AND IM SO EXCITED.

I am a little scared that it won’t live up to my expectations but I know how hard he’s been working on it and i know that he wouldn’t release something that he didn’t believe to be worthy of publishing. I can’t wait to read it and i am sure that it will quickly become a favorite.

Are you excited for Bridge of Clay as I am?